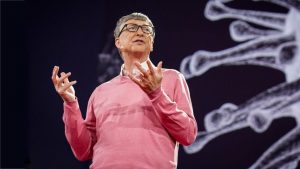 In the years since stepping down as CEO of Microsoft, Bill Gates has retained a positive profile thanks in large part to his public philanthropy, donating in excess of $50 billion of his own fortune through the Bill & Melinda Gates Foundation (BMGF). The Microsoft co-founder began career as a philanthropist in 1994 and has made it his prime focus for the last two decades.

But Gates may have reached a new echelon with his response to COVID-19, becoming a benefactor of both wealth and leadership. Along with his wife Melinda, Gates has led efforts to fund the development of treatments and therapeutics for the virus, but he has also become an outspoken voice advocating for science-based solutions and against the over politicized American response. At the same time Microsoft, the company he still advises, has taken bold steps to help tech adapt to the new normal.

For starters, Gates’ foundation (with MasterCard and Wellcome) started the COVID-19 Therapeutics Accelerator, seeded with an initial $125 million dedicated to identifying, developing, and rapidly producing treatments and therapeutics for the virus. In February, in an essay in the New England Journal of Medicine, he addressed the disease’s potential to become a full-blown pandemic.

The BMGF had already committed significant funds toward global vaccine research and epidemic preparedness, but when COVID-19 was on the early rise in the U.S., Gates was quick to infuse the global response with an additional $100 million. When the World Health Organization (WHO) found itself in need, the foundation pledged an additional $150 million, money that should prove crucial in low-and-middle-income countries. Since the BMGF is the most well-endowed private foundation in the world, it would come as no surprise if Bill and Melinda Gates extended their generosity even further.

Meanwhile, Microsoft has collaborated with UnitedHealth Group to create ProtectWell, a smartphone app that screens employees for COVID-19 symptoms and clears them to return to work. The collaboration is one between two organizations at the top of their respective industries and is one of the myriad of examples of altruistic synergy that has emerged in response to this global health crisis.

As many companies adjust to an increasingly remote workforce, Microsoft has unveiled a new “hybrid workplace” model that looks to increase overall flexibility going forward. Microsoft is also providing resources to support e-learning as teachers, students, and parents adapt to online classrooms. With these contributions, Gates has proved that charitability can define success as equally as wealth, and has demonstrated what can be achieved when industry leaders look toward humanitarian aid.