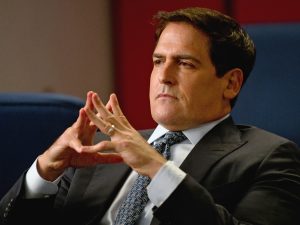 Throughout his career, billionaire Mark Cuban has garnered copious attention, attracting controversy while chasing success in multiple fields, most notably, as the owner of the NBA’s Dallas Mavericks. In this role, Cuban is more of a public figure than many of his contemporaries—he is as active in the stands as he is in the media, giving him a persistent presence as the team’s loudest advocate. Off the court, many more Americans know him as one of the long-tenured business-predators on NBC’s Shark Tank, and a small remaining few may recall him from 2004’s The Benefactor, the failed Apprentice imitation.

Before becoming a public figure, Cuban made a fortune in technology, bootstrapping himself from software salesman to dot-com success. Thanks to a combination of foresight and luck, he snuck out of that first internet boom before the bubble burst, taking the experience as a lesson in risk evaluation. Now, after over 20 years in the public sphere, Cuban is taking new tech gambles with cryptocurrency. He’s also hoping to leverage his fame and fortune toward the public good, especially coronavirus support and social justice issues.

Cuban feels free to take big chances on emerging technology beyond the Tank, and his confidence resembles the swagger of an NBA player. Since 2019, the Dallas Mavericks have accepted Bitcoin, the widely used cryptocurrency that makes news with its drastic and rapid changes in value. This year, the former internet-entrepreneur attempts to fuel the growth of meme-inspired crypto, Dogecoin, accepting both currencies through BitPay. Cuban’s rationale for taking the leap into the blockchain is simple: he can afford to do it, so why not? Almost immediately, the Mavericks have become the largest Dogecoin merchant in the world (according to Cuban), processing a whopping 20,000 transactions within the first week of accepting the meme-based currency. Cuban joins other notable celebrity investors like Elon Musk and Snoop Dogg in the crypto-club, whose board meetings take place on Twitter. With one related (or bizarre) tweet by any of the three, Dogecoin tends to surge upward, slowly-but-surely. He has also expressed interest in Ethereum, the smart-contract blockchain with potential for disruption in the enterprise software sector, among many more.

The Mavericks’ owner has also become an outspoken figure in the fights against both COVID-19 and racial injustice. Along with several of the team’s players, Cuban made a sizable donation of $500,000 to the Parkland Memorial and UT-Southwestern hospitals for a childcare fund, dedicated to supporting the families of Dallas’ first responders. He also joined them in public protest over the death of George Floyd, becoming one of a few highly visible team owners, and billionaires in general, to show public support for Black Lives Matter. When it comes to the future of both business and social justice, Cuban hopes that luck and foresight are still on his side.