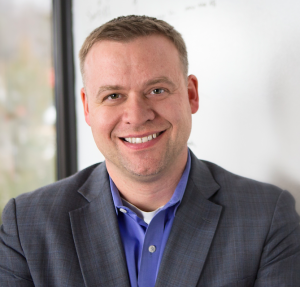 David DeWolf calls himself an accidental CEO. What originally started out as a desire to choose the people and projects he worked with quickly became something else entirely. “I am passionate about building truly innovative products, the type that change the way we live and work,” he said. “I wanted to have the opportunity to find those types of ideas and help assemble teams that could deliver on the promise. I figured being independent would afford me the best opportunity to have that flexibility.”

Based in Fairfax, Virginia, his independent career undertaking blossomed into a boutique consultancy that he could proudly call his own. “I’ll never forget that ‘Aha!’ moment when I realized that I had six employees,” DeWolf recalls. “It hit me like a ton of bricks that I was now responsible for feeding all of those families. That realization came in early 2008. It was the day that changed my life.”

DeWolf takes his leadership responsibilities very seriously and spoke about his father role in helping him understand what that means. He was raised in a military family and at one time, his father was the Brigadier General responsible for the largest arsenal of nuclear missiles in the world. Despite having 5,000 troops under his command, DeWolf’s father took a personal interest in each and every one of them.

“One night, while we were having a family dinner, the phone rang. Over the course of the next 5 minutes, I overheard a conversation that would change my perspective of leadership forever,” DeWolf said. From the conversation, he learned that one of his father’s most junior enlisted soldiers faced a potential discharge due to failing a fitness exam. In that moment and in the days to follow, DeWolf began to understand what leadership meant.

“My dad would have none of it,” DeWolf said. “He told the poor messenger on the other end of the line, in no uncertain terms, to tell the Pentagon that this soldier was under his command and he would not let a policy crafted two thousand miles away in Washington, DC, to get in the way of doing the right thing.” His father took a risk by standing up to those who gave him his orders and won the loyalty of the young woman who served under him.

When reflecting on his own leadership, DeWolf believes the key to developing a highly productive and collaborative work environment is intentionality. He puts a premium on building trust from the top of the organization down. DeWolf has learned that teams that trust each other are able to communicate openly, share new ideas and disagree with each other. Each of these elements are critical to collaboration and when a team collaborates well, they become aligned. Out of this alignment flows a more effective and productive work environment.

For motivating those who work with and for him, DeWolf knows that it’s important to hire people who know more than he does and to empower them to do their jobs. “Let them know that you’re relying on them to make the best possible decisions they can with the information they have available to them,” he advised. “Then, realize it’s your job to give them the tools and support they need to be successful.” People will thrive when they know that they have the authority to make decisions without fear of reprisal or constant second-guessing and the tools they need to get the job done.

Like anyone who needs to balance a full family life against a demanding professional life, DeWolf understands that maintaining equilibrium can be hard to do. He identifies himself as a recovering workaholic and, as he says, has only begun to realize the ramifications – both to himself and to those around him – of not taking a break. “It’s important that we recharge our batteries and clear out mind. That’s well-documented,” he says. “What’s not well documented is the downside to those around you who take their cues from your action.”

Consequently, DeWolf has made a concentrated effort to disconnect himself from the office when he needs too. He logged off of work email for five straight days over Christmas and nine days over summer. But this is not a practice he limits to himself: “When people go on vacation, we urge them to delegate a backstop who can handle any issues that arise while they are away and to truly disconnect.”

When asked what words he would have for the upcoming generation of aspiring tech services CEOs, he says it’s important to be yourself. “The journey to leadership comes with certain expectations,” he cautions. “When you’re a CEO, people want you to be the model they see on TV. Not every CEO is Steve Jobs or Mark Zuckerberg.”

He wants people to be the real leader that their team needs. People follow leader because of the bigger purpose they represent. “I don’t have a black turtleneck or hoodie in my wardrobe and if I started showing up to the office in either, the people around me would call me on it” he said.