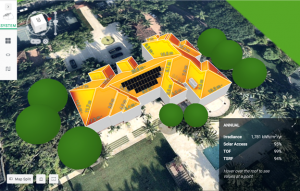 Aurora Solar is a San Francisco-based SaaS company that uses aerial imagery to assess solar installation projects. Founded in 2013, Aurora began in the dorm rooms and libraries at Stanford University, when its founders Chris Hopper and Sam Adeyemo were graduate students at the college. After class and on weekends, the two worked out a business plan for how they could bring solar panels to the masses.

The startup enables solar companies to streamline the solar project lifecycle by making it easy to integrate disparate data sources, design accurate solar installations, and automate complex workflows. Using Aurora, solar professionals can determine how many solar panels will fit on a property, forecast how much energy the solar system will produce, calculate how many batteries are needed for backup power, and show how much money their client will save by switching to solar.

Many of the solar industry’s biggest names, such as SunPower and Vivint Solar, use Aurora’s software to design rooftop solar systems. Remote imaging, which was already a standard for many solar projects, became even more important during the pandemic when stay-at-home orders slowed inspections and permitting.

Today, Aurora Solar has raised hundreds of millions of investment dollars and grown its team to 170 employees. Last month, the company announced it raised $250 million in a Series C funding round, bringing the startup’s valuation to $2 billion.

The round was led by Coatue, with participation from existing investors ICONIQ Capital, Energize Ventures, and Fifth Wall. In just over two years, Aurora Solar has raised more than $320 million.

Unlike some solar companies, Aurora has seen an uptick in business during the pandemic. Partners designed 1 million projects with Aurora’s remote-modeling software in the six months spanning April to October, a rate that outpaces past system designs, the company told Greentech Media. That brings the total number of systems designed with the software to 4 million as of October 2020.