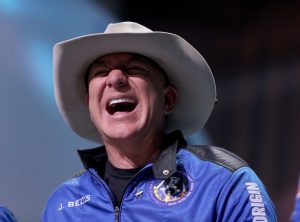 Billionaire business magnate and space travel advocate Jeff Bezos is making a grand proposal to NASA, offering up to $2 billion in financial incentives toward the development of its Human Landing System (HLS) program. In a July 26 letter to NASA Administrator Bill Nelson, Bezos proposed waiving payments for two years, at a maximum value of $2 billion, as well as other incentives in exchange for awarding Blue Origin a development contract for the HLS similar to that given to Elon Musk’s SpaceX this past April. Rather than a deferral, Bezos’ offer would be a full waiver of the payments -- a powerful strategic move designed to challenge its rival in the new global space race.

The HLS program is the cornerstone in NASA’s renewed efforts at returning to the lunar surface for the first time in 50 years. Although the original plan was intended to include two contracts, NASA awarded a sole development deal to SpaceX, which underbid Blue Origin by about $3 billion. Bezos, who briefly left Earth’s atmosphere in a July spaceflight mission, hopes to create a free-market style competition over the future of commercial and government-sponsored space travel. The U.S. Government Accountability Office is also considering an official complaint from Blue Origin regarding the SpaceX contract, with a ruling due by August 4.