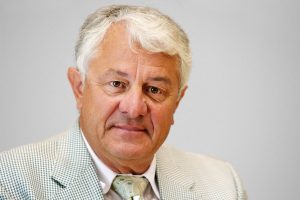 In 1972, when Hasso Plattner joined four of his fellow IBM engineers in a company exit, the term “disruptive innovation” had not yet been coined. However, after they founded SAP (System Analysis and Program Development), the company would innovate enterprise resource planning (ERP), paving the way for other software companies and innovations. Fast forward to the age of disruption and transformation, and the global ERP market is worth nearly $100 billion annually. SAP—with its signature platform, S/4HANA—holds roughly 20% of that market and is the most valuable company in Europe.

Plattner, now Chairman of the company’s supervisory board, is the most active among the original five entrepreneurs, serving in an executive role since SAP went public in 1988. He is also the company’s single largest shareholder, thanks in part to its once-in-a-generation stock slide in late-October 2020 when the chairman purchased an additional $300 million in shares. With about 6% of SAP in his portfolio, he holds a fortune of $15 billion, placing near the end of the Forbes 100 Billionaires list. Now, as he passes the torch to the next generation, namely 40-year-old CEO Christian Klein, Plattner maintains just enough involvement to benefit the company’s future.

In fact, Plattner’s large grab of stock reassured the young CEO Klein, who has faced more than a fair share of challenges during his short tenure. The COVID-19 pandemic and its significant strain on the company led to internal strife, and his co-CEO, Jennifer Morgan, was voted out. Plattner, who as Chairman and Chief Software Advisor remains the authoritative face of the company, backed Klein up, promoting the need for a sole CEO to lead the company through a global crisis. Then, it was Klein’s announcement of the failure of his predecessor, Bill McDermott’s ambitious profitability goals, stifled by the coronavirus pandemic that led to the historic drop in stock price. However, the immediate future of Plattner’s company is promising, with the impending IPO spinoff of Qualtrics, the experience management software provider acquired by SAP in 2018.

As far as Plattner is concerned, he concentrates his time in a level above executive, defining the medium and long-term technology strategy of SAP. However, with Klein steering the ship, Plattner can devote more time to his many side hustles, including philanthropic efforts, such as fighting HIV/AIDS in South Africa. He is also one of the most generous benefactors of scientific research in Germany. In 1998, he founded the Hasso Plattner Institute at the University of Potsdam, currently the first and only wholly privately funded university faculty in the country. Add in his intention to donate his fortune posthumously via The Giving Pledge, it’s clear that the 77-year-old engineer has more to contribute to SAP and the rest of the world.