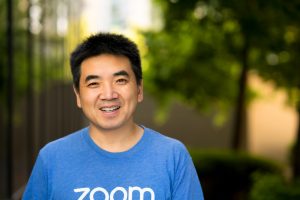 When the COVID-19 pandemic forced people around the globe to convert to remote work, Zoom quickly became ubiquitous as the go-to video conferencing platform for millions, spawning new communities and inside jokes along the way. On top of its increase with workforces, the platform provided easy access socialization for individuals in isolation, providing a digital bridge that helped narrow the chasm created by social distancing.

Eric Yuan, CEO and founder of Zoom Communications, found his company suddenly thrust into the world’s spotlight, bringing equal parts praise and scrutiny as usage (and stock prices) skyrocketed. Now many months into the coronavirus pandemic, with positive cases again on the rise, it appears that video telecommunications are an essential component of the “new normal.” With big tech rivals like Facebook, Google, and Microsoft vying for the same market attention, Yuan is hopeful that Zoom can hold its own.

Before abruptly becoming a billionaire, Yuan served as vice president of engineering at Cisco Systems after it acquired web conferencing startup WebEx. In 2011, he led an exodus of engineers and founded what would become Zoom, which struggled to find initial financial backing in what was perceived as a saturated market. After years of development and investment, the company went public in 2019, and Zoom received a valuation of $12 billion almost immediately, making Yuan a billionaire seemingly overnight.

Before the pandemic, Zoom was already courting educational institutions as well as small and medium businesses with its incredibly uncomplicated user interface, a quality that propelled rapid mass-adoption of the platform upon the onset of “shelter at home” orders. As the company experienced sudden, massive growth, security concerns soon shot to the surface, compelling Yuan into troubleshoot-and-apologize mode. The company quickly made inroads to resolve security and privacy issues, implementing end-to-end encryption for both paid and free users, while Yuan has held himself to rigorous standards of transparency throughout.

Although the security concerns and their subsequent fixes have afforded the competitors time and space to regain some ground in the market, Zoom remains the market-leader in video conferencing with a market share near 40%. As the CEO has publicly represented his company through all of its highs and lows, Yuan’s personal fortune has grown in tandem with Zoom’s prosperity, surpassing $21 billion in 2020.

The platform’s success is apparent with users and employees alike, as Zoom boasts a happy workforce in addition to a mostly satisfied consumer base. Yuan may have been caught off-guard by the once-in-a-lifetime public crisis, but the visionary leader is determined to retain Zoom’s advantage by keeping everyone happy, even at a social distance.