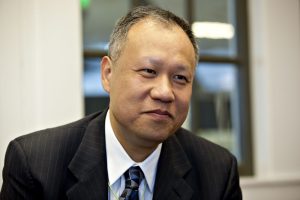 In 2021, cybersecurity is a bigger concern than it’s ever been, with clandestine cyberwarfare wreaking havoc on government networks and businesses’ infrastructures. With attacks and breaches becoming more frequent and severe, organizations from the government to private businesses and industries are implementing new strategies and improving outdated systems before the next threat rears its head. Since 2000, Ken Xie has led Fortinet alongside his brother, Michael, in efforts to “fortify networks,” as the name indicates. With 20 years of success with Fortinet and a lifetime of cyber experience behind his back, the Co-Founder, Board Chairman, and CEO Xie is poised to lead his company in the charge of fighting back and securing networks for over half a million organizations worldwide.

Born in China and educated at Tsinghua University in Beijing, Xie emigrated to Silicon Valley a decade ahead of its internet-driven boom, ultimately achieving an M.S. in mechanical engineering at Stanford University. It was his time in Palo Alto when he became acquainted with aspiring entrepreneurs, a unique feature in American colleges to this day. The inspiration led him to his early ventures in cybersecurity, Systems Integration Solutions, and NetScreen Technologies; he sold the latter to Juniper Networks. He founded Fortinet alongside his brother Michael at the turn of the century with the goal of providing next-generation network security. While brother Michael has served as the company’s president and Chief Technology Officer, Ken has held the executive reins throughout Fortinet’s brief-but-booming history. Twenty-plus years later, the Xie brothers’ company boasts a market cap of over $35 billion.

With Fortinet, Xie hopes to combat the rapidly-changing face of cyberattacks by maintaining agile security offerings for the company’s clients — and to acquire new customers by emphasizing its dynamic solutions. His company also recently launched its Training Advancement Agenda, a program that intends to bridge the cyber skills gap through intensive training and networking with external companies to bring new talent into the field. It’s a commitment that benefits both Fortinet itself and the greater cyber community as a whole. The initiative extends to the next generation as well; the Fortinet Academy Program provides training materials, resources, and certifications to students in more than 350 high schools, colleges, and universities in more than 85 countries and territories. The CEO understands that next-generation cyber protections must involve the next generation itself. With a personal fortune resting near $5 billion, Xie is a new and very welcome addition to the Forbes 400.