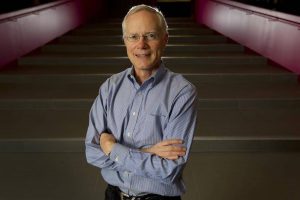 In a heavily-divided country, there is one thing that Americans largely agree on—filing taxes is frustrating and stressful. For decades, tax time evoked images of anxious accountants surrounded by stacks of paperwork. These days, however, no company is as synonymous with April 15th as Intuit, the provider of the TurboTax suite of online tax prep software. In 1983, before online tax-filing was even close to possible, Intuit Co-Founder Scott Cook wanted to replace paper books with electronic accounting software, and his idea came at the outset of the PC revolution. With Quicken and Quickbooks, his company created the model and standard of the industry, before later repeating the success with TurboTax.

Now, he serves as chairman of the company’s executive committee, but prefers the title of “chief innovator.” This tax season comes after the coronavirus pandemic sent the world into disarray, including the entire U.S. economy, and TurboTax is likely to serve as a lifeline to even more filers. With a 2019 revenue around $7 billion, Intuit’s upward trajectory seems guaranteed.

Although he maintains a modest profile, Cook has been instrumental to his company’s long-sustained success. And as an entrepreneur, founder, and innovator, he recognizes those qualities in the next generation of trailblazers, including Snapchat founder and CEO Evan Spiegel. When Cook invested in the unproven niche social media platform, he was making his bet on the young entrepreneur, becoming a mentor in the process. He believes every chief executive needs a guide, someone to tell him what his employees won’t. The gamble on Spiegel has paid off for all involved; Snap Inc. is now valued at over $80 billion.

One of the keys to Intuit’s success, and Cook’s fortune, is his education—he holds a degree in economics from the University of Southern California and an MBA from Harvard Business School. He retains a close connection to Harvard, serving on the Dean’s advisory board of HBS and occasionally returning to speak inspiration to MBA graduates. He also spreads his wisdom as a board member of eBay, Procter & Gamble, and the Asia Foundation, and he and his wife, Signe Ostby, are committed to The Giving Pledge. The couple also established the Center for Brand and Product Management at the Wisconsin School of Business, the first university-based MBA program in the booming field. He is committed to promoting the kind of entrepreneurial ideals that seem cliché—like the innovation he has constantly pursued—in the next generation of executives. As Cook has proven, ideals can get you pretty far if you have the acumen to back them up.