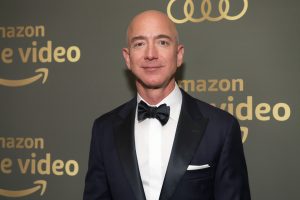 Within a quarter-century, Jeff Bezos has grown an online bookselling marketplace into the largest internet business in the world, offering products and services that are used by millions daily. Launched in 1995, Amazon began as an e-commerce platform years before the marketplace exploded into a $3 trillion dollar industry, and since then, Bezos’ company has become one of the largest companies in the world, by revenue.

The rapid growth of Bezos’ company has generated its fair share of criticism recently, especially during the response to the COVID-19 pandemic; the company’s e-commerce sales doubled during its second fiscal quarter of 2020, and the CEO’s personal fortune has skyrocketed to over $200 billion. But while the company’s most familiar services, such as retail and Prime Video, are leading drivers of growth, Amazon Web Services has become its secret weapon, covertly powering an increasing number of online enterprises.

It’s been two decades since Time Magazine named Jeff Bezos “Person of the Year” for his company’s e-commerce success, but Amazon’s greatest contribution to the internet might be AWS, with sales crossing $10 billion for the first time in 2020. During the pandemic, the industry-leading cloud provider has aided essential businesses and services such as healthcare systems, research labs, and organizations like the CDC and WHO, propelling diagnostic technologies and creating greater data access.

In addition, AWS has been instrumental in powering both remote work and virtual education, as well as platforms like Slack and Zoom which have seen huge increases in usage. Beyond essential services, AWS enables ubiquitous social media and entertainment platforms like Netflix, Twitch, LinkedIn, and Facebook—services that saw marked increases in use during the pandemic and its necessitated shutdowns.

At a glance, it’s no wonder Bezos has swiftly become one of the most wealthy and powerful individuals in the 21st century. But as the world continues to grapple with COVID-19, Bezos will continue to face criticism. Bezos has personally committed $100 million to American food banks, and AWS has committed $20 million to its Diagnostic Development Initiative aimed at innovating enhanced coronavirus testing. Some of his contemporaries would likely urge him to take on a greater role relative to his world stature, but Bezos’ influence is already expanding, whether they know it or not.