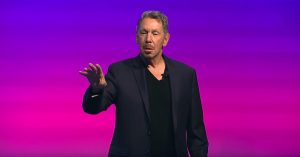 After over four decades at the forefront of computing technology, Oracle Corporation is fighting to remain relevant in the ever-expanding cloud computing landscape. In a surprising turn of events, the company found itself in the middle of the global tech fight of the year, swooping into the battle between the U.S. and China over the highly contentious video app TikTok. Suddenly, Oracle and its Chairman, Co-Founder, and CTO Larry Ellison have become a hot topic in a year superabundant with news, possibly providing Ellison with an opportunity to return to the vanguard of information technology.

After Microsoft was denied a sale by ByteDance, TikTok’s parent company, Oracle joined mega-retailer Walmart in a deal to acquire a substantial stake in its U.S. operations. While approval is pending on both sides of the globe, Ellison has succeeded in leveraging his ties to President Trump in an effort to jump back into the fray of cloud dominance.

The Silicon Valley outsider missed the opportunity to embrace cloud technology before it completely lapped Oracle’s “old-school” database management services. By the time Ellison and Oracle were ready to go all-in on the cloud, Amazon, Google, and Microsoft were working with at least a five-year advantage. Now with the addition of TikTok’s U.S. database to the Oracle Cloud, Ellison has certainly gained competitors’ attention.

As of 2020, Ellison is the eighth wealthiest individual in the world, but at 76 the tycoon is not finished solidifying his legacy. The TikTok deal is audacious, but it isn’t the only conspicuous upset Oracle has pulled off this year. In April, Oracle made headlines alongside the ubiquitous teleconference platform Zoom after it was chosen ahead of AWS and other cloud giants to expand Zoom’s cloud infrastructure.

While other billionaires like Bezos, Musk, and Zuckerberg tend to dominate the news, Ellison is reclaiming his place among America’s tech figureheads. He has even received praise from his employee-turned-rival Marc Benioff, Salesforce CEO and fellow billionaire. “Larry Ellison is the master of relevance. This is a move to make him relevant. This is so important,” Beinoff said.

At a unique time in world affairs, technology and software have proven to be essential tethers that are ever-expanding in scope and significance. Whether the TikTok deal passes the diplomatic tests or not, Ellison had made it abundantly clear that Oracle wants to be a major player in America’s digital future.