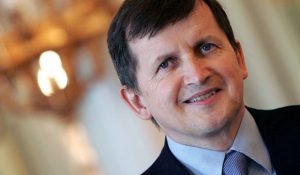 After briefly meeting with a young Bill Gates, software developer Charles Simonyi first joined Microsoft in 1981, where he led the development of software standard-bearers MS Word and Excel, eventually leaving the company in 2002. In 2017, with Gates on the sidelines, Simonyi found himself rejoining the now computing juggernaut, but not as a developer or an executive. His company, Intentional Software, which he founded in 2004, was acquired by his former company. Now, he is leading a team in pursuit of his passion for productivity software, but from the perspective of a billionaire.

Instead of retiring, Simonyi, 72, is still working as hard as ever, and one of his tasks has been to incorporate Intentional Software’s automation programming technologies into the collaborative suite he helped launch, what has become Microsoft Office 365. His department bears a grandiose name: Exploration and Development, making research sound like space travel — and that’s by design. Simonyi has been to space twice as with Space Adventures, spending an estimated $60 million for the trips to the International Space Station. His time in orbit may be a part of the inspiration for his latest preoccupation, an Office 365 app called Microsoft Whiteboard, an attempt to bring the visual canvas out of classrooms and boardrooms and onto the digital collaboration suite.

In the Seattle area, where he has worked for most of his life, he supports arts, science, and educational programs, the Seattle Symphony, and the Seattle Public Library. The Charles and Lisa Simonyi Fund for the Arts and Sciences has also given grants to the Metropolitan Opera and the Juilliard School, as well as the Vera C. Rubin Observatory in Chile, which will host the Simonyi Survey Telescope. The wealthy programmer, with a net worth of close to $5 billion, may have his feet on the ground, but his mind is focused on the stars, and he hopes to inspire the next generation of dreamers.