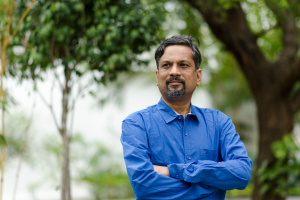 In 1996, Indian tech entrepreneur Sridhar Vembu, along with a group of siblings and friends, founded a small software development and IT company called AdventNet. The young network engineer was spellbound with India’s burgeoning software industry, especially the nascent SaaS space. After surviving the first few tumultuous years of the 2000s, Vembu’s company began developing its Zoho line of customer relationship management (CRM) and office software solutions, quietly building a business to compete in the global software ecosystem.

Now, after 25 years of growth and technological advancement, Vembu’s renamed Zoho Corporation is a trusted provider of web and cloud-based business tools for over 50 million users. The founder and CEO has impressively achieved great success while refusing venture capital investments and turning down competitors’ acquisition attempts, creating a rare, bootstrapped unicorn—a self-made, private company with an estimated value of over $5 billion.

But the billionaire business magnate is far from a typical executive. After years overseeing Zoho’s ascent from the Silicon Valley-adjacent Pleasanton, California, in 2020, Vembu relocated to a village near the southern tip of India, over 10 hours away from the company’s Chennai headquarters. His primary motivation for the move was simple: to bring modern connectivity and education to rural areas.

In 2005, he founded Zoho University, a post-secondary alternative to traditional colleges that functions more like a paid internship than a university degree program. By paying student workers to learn on the job, Vembu is cutting out the middleman, giving individuals hands-on experience in a real-world competitive technology corporation. He hopes to extend education beyond traditional borders and to provide growth opportunities for rural communities, creating benefits for Zoho in the process. He is also personally teaching students in and around his Tenkasi village, starting an informal open-air school—a free education start-up in a region where Zoom classes aren’t an option.

Vembu has a knack for making right-place, right-time decisions (Zoho Office Suite was released around the same time Google and other tech pioneers first deployed web-based collaborative business software). His foresight helped his company mitigate the early upheaval caused by COVID-19, preemptively moving his workforce remote and minimizing any downturn. Soon, he is bringing Zoho’s unconventional training program to the U.S., opening new corporate offices in Austin, Texas that will feature an American campus for Zoho University. Although his personal fortune is estimated to be over $2 billion, Vembu measures his success through the impact he makes in his community. To him, teaching is more pleasurable than his other work and more fulfilling than any accountant can measure.