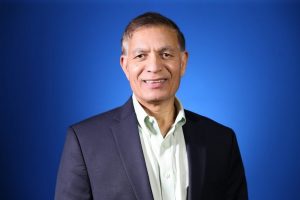 The concept of “work-from-home” has evolved dramatically since Jay Chaudhry began his journey to entrepreneurial success. Now in his early 60s, the founder and CEO of Zscaler grew up in the northern Indian village of Panoh, where his family was without electricity and running water until he was a teenager. Now, with a personal net worth of $11 billion, he is one of the richest self-made billionaires in the world. But his modest beginnings have instilled a detachment to his financial wealth, and he is far more motivated by the desire to ensure the security of both the cloud and the Internet at large.

Founded in 2007, Zscaler is not Chaudhry’s first successful venture—his previously founded companies, SecureIT, CipherTrust, CoreHarbor, and AirDefense, were all acquired by larger entities creating a substantial base to his fortune. Now, with cybersecurity more critical than ever before, Zscaler has become a leader in providing a safe, virtual space for companies and their employers to do business.

The COVID-19 pandemic forced businesses worldwide to reimagine workspaces radically, and with remote work on a steady upward trajectory, the need for reliable cybersecurity is more crucial than ever. Zscaler, with its agile and versatile platform, cloud security, remote connectivity, and more, has found itself up to the task. During 2020, Chaudhry’s company grew massively, its stock rising nearly 300%, placing it in league with Zoom as far as coronavirus success stories go. Value-added resellers (VARs) accounted for over 50% of the company’s 2020 revenues, buoyed by small and large clients alike, making his cyber-SaaS a significant competitor. As Zscaler grows its clientele and revenue, Chaudhry can continue to think big professionally and personally. He and his family own 45% of the Nasdaq-listed firm, which has a market cap of more than $25 billion.

For Chaudhry, inspiration and innovation go hand in hand. Salesforce and its charismatic CEO Marc Benioff inspired him to create Zscaler and build it into a cloud security industry stalwart. After years of developing successful companies, while evolving and staying ahead of the times, Chaudhry is just as charming as anyone else in tech. He leads his teams to think as he does, as an entrepreneur, rewarding both innovation and effort. He also strives to best serve his customers by hiring the best, and most customer-focused, employees. With cyber threats becoming more common—and more severe—Chaudhry and his company have an opportunity to become a major player in the world after COVID.