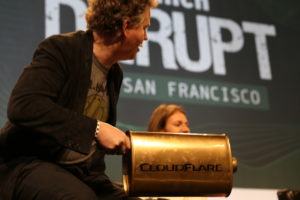 Google-backed cybersecurity startup Cloudfare has launched a new $100 million fund aimed at supporting other startups which build applications that run atop its technology. New Enterprise Associates (NEA), Venrock and Pelion Venture Partners will fund development projects at their own discretion through the Cloudfare Developer Fund.

The eight-year-old company based out of San Francisco, Calif., which protects websites from cyber attacks and speeds up website performance, opened up its network to third-party developers on Tuesday with the launch of its Cloudfare Apps Platform.

“What we realized is that not every good idea is going to come from a full-time employee at Cloudfare,” said Chief Executive Matthew Prince. “From our perspective, it adds additional rich features to our network, which makes our network more rich to our customers.”

The new platform, now available to Cloudfare network’s 6 million users, offers the ability for customers to easily add a wide array of widgets and tools to their websites. The Cloudfare app store features third-party apps that provide functionality such as maps and forms to websites without the complicated coding. Fifty new apps from the likes of Twitter, Pinterest, Zendesk and VigLink were included in the platform’s launch.

The new development platform was made possible largely by last months’ acquisition of Eager, an app platform for web property owners.

The web performance and security company’s latest decision to open up its platform demonstrates a larger vision in which Prince hopes to to build a new generation of applications that run on networks instead of devices. “On the network – where power is cheap and beautiful,” explains Prince.

The CEO clarifies that Cloudfare is not competing with the App Store or Google Play, maintaining its primary goal of providing a means for developers to reach larger markets with new web tools for existing sites.