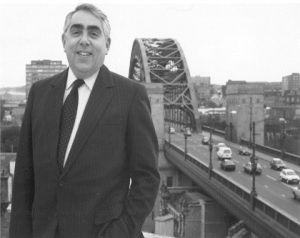 It all started with a UK professor and some students meeting up in a pub to talk about building an accounting computer program. It was 1981 and David Goldman wanted to automate the estimating and basic accounting processes of his printing business. He worked with a team of Newcastle students to develop the software he needed to make that happen.

It didn’t take Goldman long to figure out that other organizations could benefit from this kind of accounting application. He founded Sage with Paul Muller, an American computer specialist teaching at Newcastle University, and Graham Wylie, a Newcastle student who wrote the initial program that later became the first version of Sage Accounts.

They began selling their book-keeping software that same year. As desktop computers became more widely available, the company broadened out their product offerings and grew in leaps and bounds over the years. In 1984, the company launched Sage Software which was designed to work on the Amstrad Word Processor. Sales jumped from thirty copies a month to over 300 and the software quickly expanded beyond its Amstrad beginnings.

Paul Walker, one-time CEO of Sage and now non-Executive Chairman, remembers Goldman as a business father figure from his early years at the company. He recalls a time when Goldman had asked him to look after his brand-new Aston Martin DB7 while he was on vacation. With an errant turn of the wheel, Walker collided with a wall and left the DB7 with a long scrape along the side. Fortunately for the company’s future leader, Goldman was strangely serene by the wall meets car incident. “He didn’t care,” Walker said. “Nothing used to faze him. I don’t think I ever saw him get angry.”

Walker reported that Goldman had a big influence on him. “I didn’t come from a family that was business-orientated,” he said. “My father was in the Navy during the war and went into a very safe job as an engineer with BT. He was intellectually quite bright, but he wasn’t a businessman.”

He remembers that moving from a large professional firm to Sage was a tough adjustment. “I ended up in a very small company without any formal business training. The first thing I learnt, I learnt from David Goldman. He was such a charming man and so enthusiastic about what we were going to do with Sage.”

Goldman’s gift for business led Sage to much of the success it currently enjoys. Under his leadership, the company made its first acquisition with Sky Software and moved into the mid-range market. Goldman always spoke about his company’s 1989 public offering on the London Stock Exchange as one of the proudest moments of his life. This move made it possible for the company to buy other businesses both at home and abroad.

Due to health issues, Goldman retired as Sage’s Chief Executive in 1994 and Chairman in 1997. After a long illness, he passed away in 1999. Even after two decades, his legacy survives with Sage’s success. They offer cloud-based and on-premise software solutions to manage accounting, ERP, HR, payroll, payments, assets, construction and real estate. They employ 13,000 people in 23 countries and serve over six billion customers worldwide. Sage recently announced Sage Field Operations, a new mobile app that was designed to streamline communication between field teams and their office counterparts.