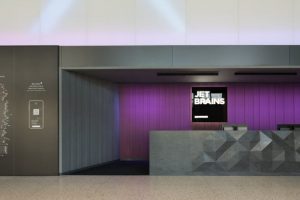 In the year 2000, the dot-com bubble-bust forced many young tech companies out of business, and investors tightened their purses as they waited for the dust to settle. That same year, three Russian software engineers combined forces to bootstrap their way into the development ecosystem, founding JetBrains in Prague, Czech Republic.

With their innovative integrated development environments (IDEs) and other products, JetBrains, originally called IntelliJ, has provided software developers and programmers with the tools to build the modern technology landscape. After 20 years of self-funded success, co-founders Sergey Dmitriev and Valentin Kipiatkov maintain control from a distance, while homegrown CEO Maxim Shafirov runs the show for one of the biggest software companies in the world—and one that’s not necessarily a household name.

Now, counting 95 of the Fortune 100 companies as its customers, JetBrains is valued at $7 billion by the Bloomberg Billionaires Index. Most impressively, Dmitriev and the others have built this fortune without the help of venture capital and have done so by design.

JetBrains has grown alongside the advancements in programming language, beginning with IntelliJ for Java and evolving with new technologies like .NET framework, continually developing new ways to work in the budding industry. Along the way, venture capital interests have tried and failed to entice the founders into accepting funding, with Dmitriev and Kipiatkov content to remain self-reliant. In 2018, the company reported nearly $270 million in revenue, with year-over-year growth of 33%, but with the COVID-19 pandemic driving rapid adoption of remote workplaces, the company expects 10% or more revenue growth for 2020.

With such a widely used array of development and productivity products, used by as many as 9 million programmers across 300,000 companies, there is a greater danger of unexpected catastrophes such as security breaches. In 2020, Austin-based IT network-monitoring software developer SolarWinds was involved in one of the worst cyberattacks in U.S. history, a hack that penetrated some of the most secure departments of the government.

Some early in-depth reports of the attack imply the breach could have stemmed from infiltration of the JetBrains product TeamCity, a widely-deployed coding-collaboration tool. According to Shafirov, the company has yet to be contacted by the U.S. government, and JetBrains staff have not found any red flags of exposure or vulnerability. But the mere implication is enough to give Dmitriev and company pause when it comes to bringing in outside investors and venture capitalists—or at least as it relates to launching an initial public offering.

Just prior to the new year, JetBrains launched Space, a new “integrated team environment” workplace collaboration suite aimed at competing with Atlassian, Slack, and others. Developed based on the company’s own workforce limitations, Space could potentially usher JetBrains into household-name-territory—as long as scandal doesn’t make it infamous first.