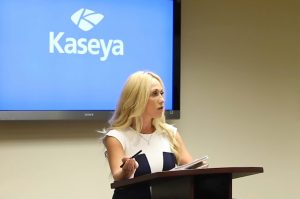 The first thing you might be interested to learn about Taunia Kipp is that her experience as a technology executive spans more than 20 years. However, what makes her rise to the top all the more compelling is her surprising origin story.

The first few years of Taunia's career were as an early intervention special education teacher. “The unusual path that led me from school teacher to technologist was when I decided I wanted to stretch my abilities as an educator,” she told The Software Report. “And in the late nineties, [I] answered an ad seeking a unified telecommunications instructor. This, despite the fact that I knew nothing about tech and had only even recently started using my first home computer.”

At the time, Taunia remembers that voice and data convergence were in its nascent stages. As VOIP, digital versus analog signaling, computerized attendant positions for phone operators, and complicated platforms to administer phone networks and call-centers became increasingly accessible; the unified communications companies and service providers who sold these systems realized that they needed to hire systems trainers to instruct end-users. Taunia decided to "embrace the challenge of learning complicated technologies." This is where she discovered her ability to quickly understand complex designs and workflows and to simplify these into curriculums that anyone could understand, even training system operators who had never touched a computer before.

This was a pivotal moment in her career. “It was then that I decided to go back to school to study Telecommunications Management while still working fulltime in the field.” Taunia then went on to serve in roles as a unified communication systems designer, systems engineer and eventually in her first management role as GM for a regional Teleconnect serving colleges and universities. Since those days, she has served as the VP of Marketing and Business Development for a global digital media entertainment company and as the COO for a national ecommerce, payment gateway and level 1 PCI Data Hosting Provider.

Taunia came to her current company, Kaseya nearly eight years ago as a senior product marketing manager and since has served in a number of management roles prior to her current position as the company’s EVP of Corporate Marketing and Chief Communications Officer. She boils her success down to "constantly analyzing data to evaluate effectiveness." Making steady work of anything and everything she applies logic and uses "quantifiable measurements of success" in driving successful campaigns, projects, and processes. "After all, how do you know it's a success if you haven't put instrumentation in place to record and measure your results?," she quips.

Being at the helm of a company with a near $2B valuation and which has been through 11 mergers and acquisitions in the last seven years has sharpened her communication skills and position as a team leader. Taunia bemoans that the value of planning and communication can get lost in the excitement of any M&A deal. "My advice to other communications professionals when it comes to M&A activity would be to identify your stakeholders early and customize your communication plan along with a tightly choreographed timeline that sends your key messages to the right audience – at the right time. Remember that communication is not just about a press announcement; you must consider employees, customers, strategic partners, analysts, and your investment community."

It's immediately apparent why Taunia is such a vital part of Kaseya, the global leading provider of complete IT Infrastructure Management Solutions for managed service providers (MSPs) and internal IT organizations. She looks at the bigger picture and manages to take into consideration her own abilities, her team, and even her skeptics. It's how she honors an early mentor that took a chance on the tech executive when she was just a young school teacher.

“He told me to ‘hire to my weaknesses’ and that it doesn't make you look like less of a leader or threaten your role by building your team with those who are more skilled than you are in a certain area but that it instead, it allows you to focus wholly on your strengths,” she said. “So surround yourself with people who know more than you do in the areas where you are weakest. I have a team today with exceptional abilities in their areas of focus and I rely on them every day to shine where I am weak.”

It's excellent advice from a leader who appears unshakeable tempered by a wealth of experience, poised to face new challenges in the SMB marketplace. Multi-function IT, "is the problem that SMB IT professionals face whereby they have small IT teams who need to be a 'master of everything' by using a bunch of disparate tools to manage their IT needs - and who spend a lot of wasted hours jumping between products and interfaces to do their daily tasks around things like IT security, compliance, backup, and disaster recovery, IT documentation, endpoint management," Taunia explains. She calls it "the space between” – which is the wasted time that technicians spend on these tasks, and Kaseya is solving for this with its IT Complete platform, which offers tightly workflow integrated tools to allow IT management professionals to perform all their tasks from a single, purpose-built unified platform.

While Taunia is a leader in her field, no one is the sum of their job. Despite often traveling for work, there is one place that she goes to for some r&r. "I always love to be home in beautiful Saratoga Springs, NY. It's my home, my community, my family."