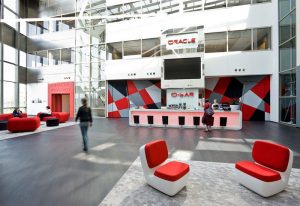 Larry Ellison founded Oracle in the 1970s, though many don't talk about the company's ties to the CIA from the very moment it was created. According to Gizmodo, Ellison chose the name Oracle because he worked on the CIA’s database networking plans, also called Oracle. Today Ellison is a billionaire, but he started it all by working at a company called Ampex, building a terabit memory system for the CIA.

The reason why this history is being talked about today — over 40 years later — is that The Intercept has reported on Oracle’s Endeca Information Discovery technology that was used by the Chicago Police Department to spy on NATO protesters in 2012. According to the reports, Oracle's Endeca technology merged crime records, 911 calls, and other police information with protesters’ tweets to identify them. Oracle acquired Endeca in 2011.

The Intercept’s report also revealed that Oracle had marketed its software for use by police and military-linked clients in China and maintained ties with brokers selling surveillance technology to the Chinese government.

Oracle responded to these claims by pushing back against them. Meanwhile, Oracle’s top lobbyist, Ken Glueck, was suspended on Twitter after he doxed the Intercept’s reporter and shared his personal information on the social media platform. He’s since apologized.

“The sweet spot for avoiding condemnation is a less-than-the-big-5-sized American company,” said Paul Rosenzweig, a senior fellow at the libertarian R Street Institute. Google and Facebook, he added, have “become the focus particularly of conservative ire,” whereas Oracle has escaped that fate.

It’s worth keeping an eye on what will be next for Oracle, considering that the company is in talks with the U.S. government to potentially partner with TikTok, as a way to mitigate TikTok’s closeness with Beijing, which is ironic considering the Intercept’s reports. As for Oracle’s reputation, it seems that so far it remains unaffected. Oracle stock has been steadily rising to all-time highs as post-pandemic growth resumes.