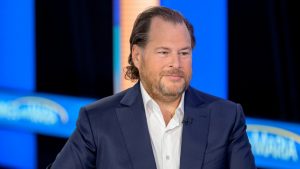 Host Jim Cramer asked the billionaire Internet entrepreneur his thoughts on Biden’s accusatory remarks directed towards social media platforms such as Facebook. Biden remarked to reporters that platforms such as Facebook were spreading misinformation about COVID-19 and were “killing people.” Later, President Biden addressed his criticisms and clarified that his comments were leveled toward users who were proliferating harmful and misleading health information and not toward the platforms themselves. Benioff stated that, “He's saying a lot of really smart things.” He did not say that he agreed with Biden’s words, but suggested that he didn’t subscribe to the complaint that the current president is anti-tech.

The White House has been accused of being ill-disposed toward the tech industry as the Biden Administration has taken what seems to be “anti-competitive practices in Big Tech.” President Biden recently signed an order to update antitrust laws while the White House hired Jonathan Kanter, a Big Tech critic, to be the head of the Justice Department's Antitrust Division.

Benioff stated, “We have a crisis of prioritization in government. We have got to figure out what's truly important, and certainly our technology industry is one of the great assets of our country.”