Home Companies Salesforce Dominates CRM Market — Could It Be Strong Enough To Reach... 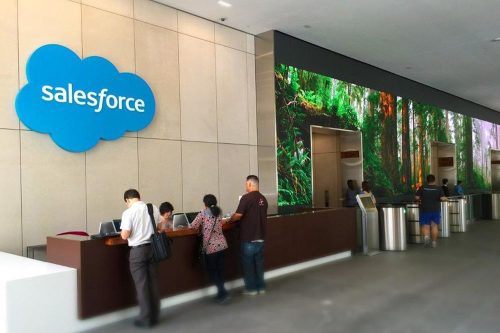 In just over two decades, Salesforce has grown into one of the most dominant companies in enterprise software, with a nearly 20% stake in the customer relationship management (CRM) market as of 2021. Led by the outspoken entrepreneur and philanthropist Marc Benioff, Salesforce has leveraged cloud adoption and cutting-edge software to grow rapidly and establish itself as the CRM industry standard. Many speculators and experts wonder, if its revenues continue to increase at its current rate of 26% year-over-year, could it join the trillion-dollar-company club within the decade?

Salesforce currently boasts a market cap of just over $215 billion, meaning it would need to nearly quintuple in value in order to become a trillion-dollar company by 2030, requiring roughly a 15% annual growth rate. Competitors like Microsoft, Oracle, and SAP have struggled to make a dent in its market command, but in an ever-volatile global economy, one or two strategic mistakes by Salesforce could make or break its future. In 2021, Salesforce purchased the workplace communications platform Slack for nearly $28 billion, an investment that could either expand its dominance in the industry or represent an uncharacteristic moment of poor judgment by Benioff and his company. The trillion-dollar club is small, currently only occupied by Apple, Amazon, Microsoft, Alphabet, and Tesla. Meta Platforms, Facebook’s parent company, lost billions in value in early 2022 to become the first giant kicked out of the club.