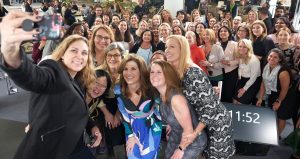 It took under a year for SAP’s newly appointed president of their North America division, Jennifer Morgan, to tackle the touchy subject of wage disparity. Since joining the company in 2004 as president of SAP’s North American Civilian Division, her rise through the ranks has been steady but she has never forgotten the importance of cultivating a workplace where all employees can flourish.

In late 2015, the German-based software giant hired the law firm Littler Mendelson PC to assess pay for its U.S. employees. The report was made public and it was found that just under 1 percent of the company’s workforce was underpaid – many appeared to be the result of acquisitions where employee wages had not been adjusted accordingly. Morgan led the initiative that saw that those gaps closed between men and women workers.

“For me, this was part of a very passionate belief in building what needs to be a different kind of culture than maybe existed in our industry five, 10 years ago,” Morgan said of the project. “It’s a highly competitive marketplace. People have lots of choices. That leaves a very obvious area where you can differentiate, and that’s around culture and people.”

Morgan graduated with a bachelor of arts and science from James Madison University in 1993. She served in various management roles with both Accenture and Siebel Systems before coming aboard with SAP. During her fifteen-year tenure with the tech-giant, she has hit more milestones than most will in their entire career.

She holds the honor of being the first American woman appointed to SAP’s executive board and has been pivotal in the company’s swift and aggressive transition to cloud-based technologies. She believed that North America had an important role to play in the corporation’s future.

“In North America we carry a responsibility knowing that we’re really setting the table in terms of our cloud growth for the rest of the company because this is where a lot of those competitors really are,” she said in a 2016 interview. “The growth in cloud is really, really critical and we are continuing to grow that business.”

Two years later, the company’s 2018 cloud revenues outpaced licensed revenue for the first time in SAP’s almost fifty-year history. Even with these impressive numbers, Morgan isn’t about to rest on her cloud-adopting laurels. The toughest part of her job, she thinks, is ensuring that the company is transforming itself fast enough. SAP is a large, unwieldy business with a sprawling global presence. Morgan is cognizant that being too slow to embrace the cloud is much like steering the Titanic away from that fateful enterprise software iceberg that she’s sure will sink them all.

While some may describe Morgan’s ascent to one of SAP’s top leadership positions as speedy, she begs to differ. “In yesterday’s world, my rise would be considered fast,” she said, adding, “I mean, I’m 47 years old. I’m not 27.”

She believes the world of business has changed dramatically and consequently, leaders are more diverse than ever. However, the heart of good leadership remains with those who know that people and company performance are inextricably linked.

“One of my earliest learnings came when I was running the North America business at SAP, when I would [conduct] business reviews with the different leaders across the region,” she recalled. “The first thing that would be on the screen [when they walked in] would be financial numbers. As I learned about the different businesses and how they were performing, I noticed that the ones that were performing well tended to have a real strong focus on people and developing their team.”

“So I always say, if you focus on the people, the numbers will follow.”