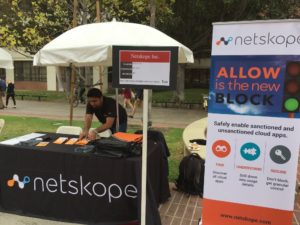 The five-year-old company, founded by a team of industry veterans, lists over 400 enterprise customers across verticals such as healthcare, energy, retail and finance, who send their traffic through Netskope’s infrastructure, where it is monitored in private data centers around the world. As the rapid adoption of cloud services opens up a new realm of possibilities for cybercriminals, Netskope acts as a gatekeeper between businesses and their cloud-based apps such as Salesforce and Box.

While the Los Altos, Calif.-based startup’s valuation has been kept quiet, founder and CEO Sanjay Beri says the recent funding marks a “significant upround” and will likely be its final venture round. With $231.4 million in funding to date, including its latest $75 million round in September of 2015, Netskope’s valuation could hover near the $1 billion mark.

Beri, an alum of cloud-based networking player Juniper Networks, says the new funding will allow Netskope to be financially independent so that it can “chart its own course.” While the startup has succeeded in boosting its revenue and customer-base nearly threefold over the past year, it will now focus on becoming profitable and stealing market share from traditional security providers including Palo Alto Networks and Symantec.