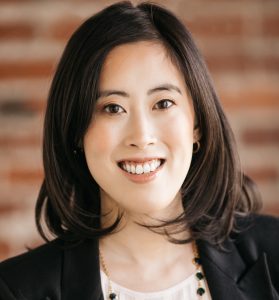 Six years ago, Sandi Lin decided to take a chance. She left a promising career at Amazon and struck out on her own with two other colleagues to start a company called Skilljar. Since then, the company has seen significant growth and recently raised $16.5 million in venture capital funding to keep up with customer demand.

Skilljar is a customer learning platform used by companies like Zuora, Cisco, and Tableau to improve product adoption and customer retention. Unlike HR systems, their service is designed for the needs of external audiences like customers and partners. Lin is CEO and co-founder of the company and like most leaders of a start-up, she spends a lot of her time doing a little bit of everything.

When asked about her inspiration to succeed in her career, Lin points to the influences of her family. As the daughter of immigrants to the United States, she learned early that hard work and achievement against societal odds were necessary for moving forward in life. Her father was an entrepreneur and started his own IT company so she grew up in a home where technology was an every day event.

“For much of my life, I channeled my resulting ambition into academics, sports, and music,” Lin said in an interview. “Now, in my career, I find continued enjoyment and satisfaction in pushing the boundaries of what’s possible in myself and the world.”

She also credits her experience at Amazon for how she developed her leadership style. One person stands out amongst the rest and that was Tom Taylor, Vice President of Seller Services. Lin recalls Taylor as someone who was incredibly smart, thoughtful, innovative, accessible and kind. He always took the time to attend daily stand-ups and empowered his team to take on big challenges.

“When I later transferred to a different organization,” Lin recalls. “He proactively invited me to lunch quarterly so we could keep in touch – which was so meaningful to me, as a relatively junior employee in a huge company.”

On how she challenges her people to bring their best, Lin points to the importance of clarity about company priorities and expectations. She does this primarily through quarterly goal-setting process and OKR’s (objectives and key results) which align the organization around their mission and the value being delivered to customers. Lin admits that while this method works well for high judgment employees, she is still working through how to best work with those who require more task-driven oversight.

By far, Lin’s biggest professional challenge was fundraising. Most angel investors wish to invest locally and Seattle didn’t offer a lot of capital for those needing early-stage assistance. “Raising our seed round back in 2015 was very difficult on many levels,” Lin sad. “I felt an enormous sense of responsibility for our early customers, employees and angel investors.”

Lin described her process for raising capital as three-pronged. First, treat the process as a numbers game. If she were to assume that 1 in 100 investors will ultimately invest, then she needed to develop a pipleline of 100 investor meetings and warm introductions. She relied on AngelList and LinkedIn to help her develop a spreadsheet of investor potentials.

Lin also relied on her team to help raise capital. She remembers that her team at the time consisted mainly of engineers and herself. “Fundraising was a zero-sum game that came at the expense of sales, customer success and marketing,” Lin said. “Everyone was out of their comfort zone but we all understood that it was needed to make the company successful.”

Perhaps the most important part to remember but the easiest to forget about fundraising was prioritizing personal care. Lin realized that about halfway through the process, she realized that she was a physical wreck and in danger of burnout. She decided to pay special attention to sleep, nutrition, exercise and meditation which helped her a lot.

For aspiring women leaders in the technology industry, Lin has some simple, straightforward advice. “Learn to code,” she said. “I know it’s a cliché these days, but women especially need to prove they understand technology at a fundamental level to be taken seriously. Even if you aspire to be in sales or marketing, knowing how software works will give you an enormous advantage in customer discussions and long-term credibility for success.”

The Software Report is a comprehensive source for market research and insights, business news, investment activity and corporate actions related to the software sector. Based in New York City, the firm is run by a seasoned team of editors, writers and media professionals highly knowledgeable on software and the various companies, executives and investors that make up the sector.
Contact us: cu[email protected]
© The Software Report. All Rights Reserved.