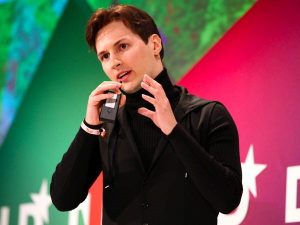 In the modern tech-enabled world, there are few topics as critical and contentious as social media and cybersecurity. For Russia-born expatriate Pavel Durov, these subjects are part and parcel of his success. Durov, the 36-year-old CEO and Co-Founder of Telegram —one of the most controversy-courting messaging platforms in app stores—is often called “Russia’s Zuckerberg,” for better or worse. His Telegram messenger is a top competitor to Facebook’s WhatsApp messenger, with both drawing ire from governments and public forums for their various security and speech regulation issues.

In 2006, Durov and his brother Nikolai launched VK, a Russian response to the burgeoning U.S. social networking site Facebook. The brothers were pushed out of the company after butting heads with the Russian government, eventually compelling the Durovs to resettle in Dubai, where they currently run Telegram. Their instant messaging app now boasts more than 500 million users, including some hate groups seeking digital asylum as free-speech refugees. Telegram’s success, with all of its security and content concerns in tow, has fueled Durov’s personal wealth, giving him an estimated net worth north of $17 billion. Despite the ongoing scrutiny of both Telegram and Facebook, Durov isn’t afraid to take potshots at Zuckerberg, claiming his company “respects its users” more than its American counterpart.