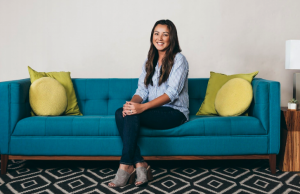 As a first-generation immigrant and the only child of Vietnamese parents who moved to America in the 70s, Sandra Nguyen has always been cognizant that the pursuit of happiness is built on tenacity, persistence, and hard work.

Nguyen applies these values as she leads the business’s most important teams in her role as Vice President of People & Culture at Volusion— even though she never intended to end up there. Beginning her career at Volusion by working in sales, despite having no previous sales experience, it was clear from the beginning she would be an asset at the e-commerce builder.

Past experience has never been any indication of future behavior for Nguyen whose instincts have always taken her further than a line on her resume. Previous roles at Apple and Avaya gave her all the soft skills she needed, managing to learn the rest on the job. Following a promotion into her Design Manager role, Nguyen was given the chance to build a new team, which then evolved into something bigger.

It’s not uncommon for employees at startups to take on multifaceted roles that blend and weave into different departments. While not everyone can take this on with grace, Nguyen was quick to recognize this as an opportunity for her career progression. “I realized it was my calling,” she told The Software Report. “Being in a start-up, you roll up your sleeves and do whatever it takes to help grow the business.”

For her, this meant focusing on Volusion’s need for an HR-focused department. Immersing herself in “all things HR,” she went on to not only complete her SHRM Certification but also grew the business from a team of 50 to 100 employees as their sole recruiter. Now Nguyen is at the helm of People & Culture, which includes recruiting as well as running a team of eight across operations and facilities.

At the heart of what makes Nguyen, a valuable leader is her proclivity for empathy. This isn’t just lip service, as she demands we all question company policies, open the feedback process to everyone despite their seniority while building strong personal connections. Understanding that the company is just the sum of its parts, Nguyen is indebted to her team, who “truly inspires me every day— they work relentlessly to make us a top workplace.” It’s courageous to suggest turning traditional business values upside down is the way into the future, but Nguyen is nothing if not innovative. After all, that’s how she got this far.

In 2018, Volusion was voted as one of the best places to work by the Austin Business Journal, an accolade Nguyen cites as one of her proudest. Known for being "humble, collaborative, and experimental" the Austin-based startup offers unlimited paid time off, and purports to put people before "everything else." Also as a finalist in Austin Business Journal’s 2010 Central Texas Women of Influence, Nguyen has her own impressive accomplishments.

She credits her intuitive methods to one of her favorite books, Dare to Lead by Brene Brown. “[Brown] talks about brave work, tough conversations, and whole heart [which] has inspired me to be a more courageous leader,” Nguyen admits. “[We] hope to start that movement within our leadership team to become brave leaders while building and cultivating a strong courageous culture.”

After celebrating a decade at Volusion, Nguyen admits she enjoys the simple pleasures in life. “As silly as it sounds, I would have to say my [favorite place] is home. Between work and family life, it’s rare we have a weekend at home.” But you wouldn’t be hard-pressed to find her unwinding on the golf course, either. Work hard and play harder isn’t a bad motto to live by.