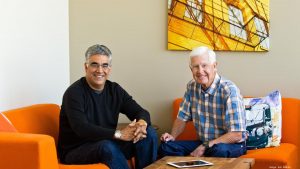 In March 2005, two former PeopleSoft executives set out to redeem themselves and their team from the nightmare of a transaction experience they went through during their Oracle takeover. David Duffield, then vice chair of PeopleSoft and Aneel Bhusri, head of product strategy, used that experience to fuel their drive to outcompete in the world of enterprise software.

David and Aneel formed Workday, a company that provides financial management and human capital management software delivered in a SaaS model. David had founded PeopleSoft nearly two decades prior in 1987 and grew it to become the world’s second-largest application software company prior to its acquisition by Oracle in January of 2005.

Aneel Bhusri first met David when he joined PeopleSoft in 1993 where he became director of planning for the company. Aneel was born in Pittsford, New York, earned his bachelor’s degree from Brown University and an MBA from Stanford’s Graduate School of Business. He is currently a partner at Greylock, a software investment fund which has backed companies such as Facebook, Groupon, Dropbox, Tumblr and Airbnb.

The dynamic duo have chemistry and that chemistry enabled Workday to become one of the fastest growing enterprise software companies in the world soon to generate $1.0 billion in revenue per quarter. According to Aneel, intense customer focus continues to be core to their strategy stating “We continue to attract new customers and many of our current customers are growing their investments with us. Our customer satisfaction rating remains amongst the highest in enterprise software and the success of our customers is a cornerstone of our long term business strategy.”

Moreover, the two are great at deciding which companies to acquire to expand their solution set. A year ago, they acquired Adaptive Insights for $1.55 billion, then an alarming purchase price but now a fantastic bargain. “Q1 was our third quarter with the Adaptive Insights Business Planning Cloud and customer demand continues to reinforce our confidence in the long-term opportunity. We added 150 standalone Adaptive deals and had great success selling to large enterprises, with approximately 50 deals representing both platform sales and Planning add-ons.”

It also helps that cloud-based financial applications are on a big uptake by large corporations. Workday is finding that Fortune 500 companies are following a similar quick adoption pattern with financial software as they did with human resources software five to six years ago. Moreover, cloud is being viewed as the preferred deployment option vesus on-premises.

There are many other reasons why David and Aneel have made Workday into an enterprise software darling, but perhaps core to all of it is they started with their chemistry and deep domain knowledge. From there, they built a fantastic organization around them and stayed focus on serving their customers well, acquiring to expand their solution set and riding the trends in could software adoption.