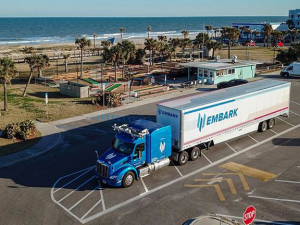 Embark Trucks, a San Francisco autonomous vehicle software startup, announced in June a deal to go public via a special purpose acquisition company, in a $5.2 billion merger with Northern Genesis Acquisition Group II. Embark, which offers AV technology in a software as a service solution, was co-founded by Alex Rodrigues and Brandon Moak in 2016, and hopes to compete with Plus and others in the driverless freight truck race. Rodrigues, who serves as CEO at age 25, expects to raise over $600 million in cash proceeds, including a $200 million private investment from Knight-Swift Transportation Holdings, Sequoia Capital and Tiger Global, to name a few.

In a 2020 analysis report, the freight trucking industry in the U.S. was estimated to have a market value of $1.1 trillion and on track to reach $5.5 trillion by 2027. CEO Rodrigues, a robotics engineer by trade, hopes Embark’s technology will save its customers time and money while also increasing fuel-efficiency by 10 percent and improving road safety. The public listing deal, the company estimates, will provide enough working capital to fund the company for the next four years.