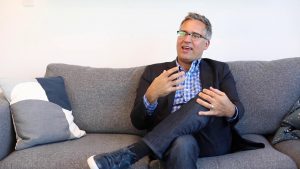 The Series D round of fundraising, which also includes existing investors OpenView, M12 and Voyager Capital will go in part to help the Seattle, Washington-based SaaS company text enable what it says is more than 200 million business phone numbers in North America. It's also using proceeds for an “aggressive product expansion strategy” that includes hiring more engineers, product developers, and executive level professionals.

“In 2014, you couldn’t text enable an existing business number, so Zipwhip worked with all the mobile carriers to make it possible to text enable existing landlines, toll-free and VOIP numbers. These partnerships paved way for the entire texting-for-business industry that Zipwhip has continued to lead,” said ZipWhip Chief Executive John Lauer in a recent blog post announcing the funding round. “Since then, we have seen a boom in the number of businesses that recognize the power and importance of texting, all the while consumer demand for fast, easy and convenient communications has only increased.”

In 2018, Lauer said its messaging traffic increased 262%, with the company text enabling 3.3 million landline, VoIP and toll-free phone numbers. With 10,000 direct software customers, Lauer said revenue increased more than 80%. It has around 20,000 customers, among them 100 large enterprises.

On the platform, customers are able to activate any business numbers they use to interact with customers. When a text comes into that number, it gets sent through ZipWhip’s platform. It shows up on the customer’s dashboard so the business can respond. Essential to the platform’s ability to do that and its success is its relationships with the carriers. ZipWhip reached deals with all of the leading U.S. carriers so that the texts can be routed to ZipWhip’s platform.

The growth round comes on the heels of a fund-raising round in September of 2017 which brought in $22.5 million. ZipWhip and competitors such as OpenMarket and MessageBird are trying to capitalize on that gap in the communications strategy of businesses. They know they can reach customers via phone, online and through email but texting has been out of their reach. With texting becoming the preferred means of communications for millions it makes sense that ZipWhip’s services would be in demand.

“Zipwhip sits at the powerful intersection of a huge addressable market, a proven history in industry innovation and an agile SaaS-based approach that will allow the company to grow and evolve for the foreseeable future,” said Hillel Moerman, Head of Goldman Sachs’ Private Capital Investing group in a press release announcing the funding. “The product, team and corporate vision behind Zipwhip position the company to continue its successful trajectory.”